Every one devoted to Jesus Christ may still harbor a secret idolatry. I include myself in this group. Here is where our christian walk meets the hard realities of the teachings of Jesus. Unless we say ‘yes’ to his call, we are still in idolatry.

The Fullness of Time Hypothesis suggests that God did away with the ancient forms of idolatry following the destruction of Jerusalem in 586 BC. New types of idolatry grew up as civilizations matured and nations became more modern. Idolatry turned secret and inward and people became idolaters of the heart.

Three types of modern idolatry can be spotted in others by watching their actions or listening to their words.

Secular humanism is another word for agnosticism. It sets man above any god or supreme being and denies God the creator. I became agnostic as a result of being raised in a religious setting. My rebellion against hypocrisy of religious leaders and other church members drove me to seek the truth in science and humanism.

Religious fanaticism is a way to pretend to know and love God while hating Him and anyone who follows Him. The religious fanatic guides others on a dangerous path that leads to death. He demands proper behavior in others and adherence to laws and rules as the path to righteousness. His own behavior is hypocritical and justified.

Religious atheism can also be called religious humanism. During my secular humanistic phase, I searched for the truth in eastern mysticism. New Age philosophy holds that each person can improve themselves through meditation and good works. They do not admit to a supreme creator God and believe the universe is governed by inanimate forces that are barely controllable.

I rely heavily on the writings of Heather C. King in her book Anywhere Faith: Overcoming Fear, Insecurity, and Excuses and Say Yes to God  for the following insights. She writes:

Anything, even a good thing, that pulls us away from God and his ultimate plan for us is an idol. Yes, idolatry might involve sticks and statues, but it’s so much more than that. It’s about misplaced focus and mixed up priorities. We can make idols of our kids, of worldly success, of power, of position and even of ministry. What makes our idols so hard to identify is that they are often disguised as good, acceptable, and even religious. (Anywhere Faith, p 189)

The message in this book is that everyone can benefit from searching their heart and finding that one thing that prevents them from saying ‘yes’ to the call of Jesus.

As a mature Christian, I became vulnerable to hidden idolatry of the heart. What does it mean to be a mature Christian? After thirty years following the Lord, I felt I had the ability to tell others who had less experience.
I had grown in the Lord enough to follow him and continue to make progress. I felt I knew it all. The rich young ruler also felt this way when he asked Jesus what he must do to inherit eternal life. But for a Christian who has devoted his/her life to Jesus Christ, idolatry of the heart can creep in and delay progress or christian growth.

From now on I will listen more carefully, try to hear my Lord and do what he asks of me. If anyone else benefits from my experiences, then that is good, but it is not the primary goal. My goal is to listen to and say ‘yes’ to Jesus. 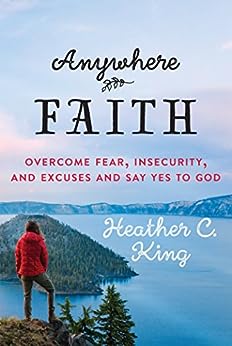